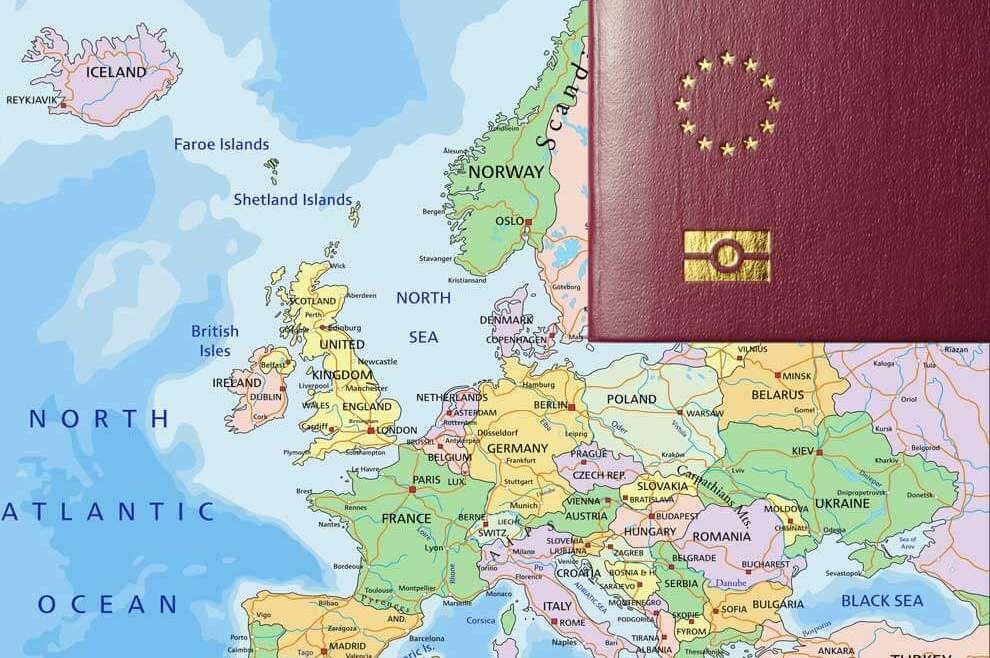 Today we are publishing our first edition of of Best Passport Rankings Index 2020, developed in association with World Citizenship Council (WCC) and Best Citizenships (BC)

As we head towards the future,  Globalisation is playing an important role shaping the free movement. With increased pressure on immigration systems, developed countries look to reduce free movement by hardening visa restrictions on passports day by day. A significant number of countries have moved to eVisa/eTA digital platforms to cut Govt spending and reduce administrative burden on missions abroad.

Our study shows freedom movement is declining on global scale. By 2022 we believe, the travel freedom with passports will be more curtailed, and sadly freedom of boarding a plane with just your passport will be pretty much over. All passports will most likely require a Electronic authorisation or Evisa when boarding a plane. The European Travel authorization ETIAS will start by next year and United Kingdom has also announced similar plans to impose ETA’s similar that of US and Canada.

Before we get into passport rankings, just think about few basic questions first.

Our model will precisely provide best answers to above questions.

We have developed one of a kind Passport based scoring (PBS) model, that looks into visa restrictions imposed on 199 world passports and basically tells you which best passport has gives you access to countries in the world.

We collected visa data from freely and publicly available information from Wikipedia for our study.

Our model, looks even further, more than visas, such as ability to combine dual passports to travel to more countries and also seek consulate protection available for passport holders abroad. We have integrated these two metrics for the first time, to rank a passport. These two important metrics is perhaps what differentiates our model from other passport indexes.

Our model also scores low points to soft visa categories (eVisa /eTA, VOA etc.), as we consider these as soft visa restrictions.  As a result

We looked into visa restrictions of 199 passports in the world. Here are our findings 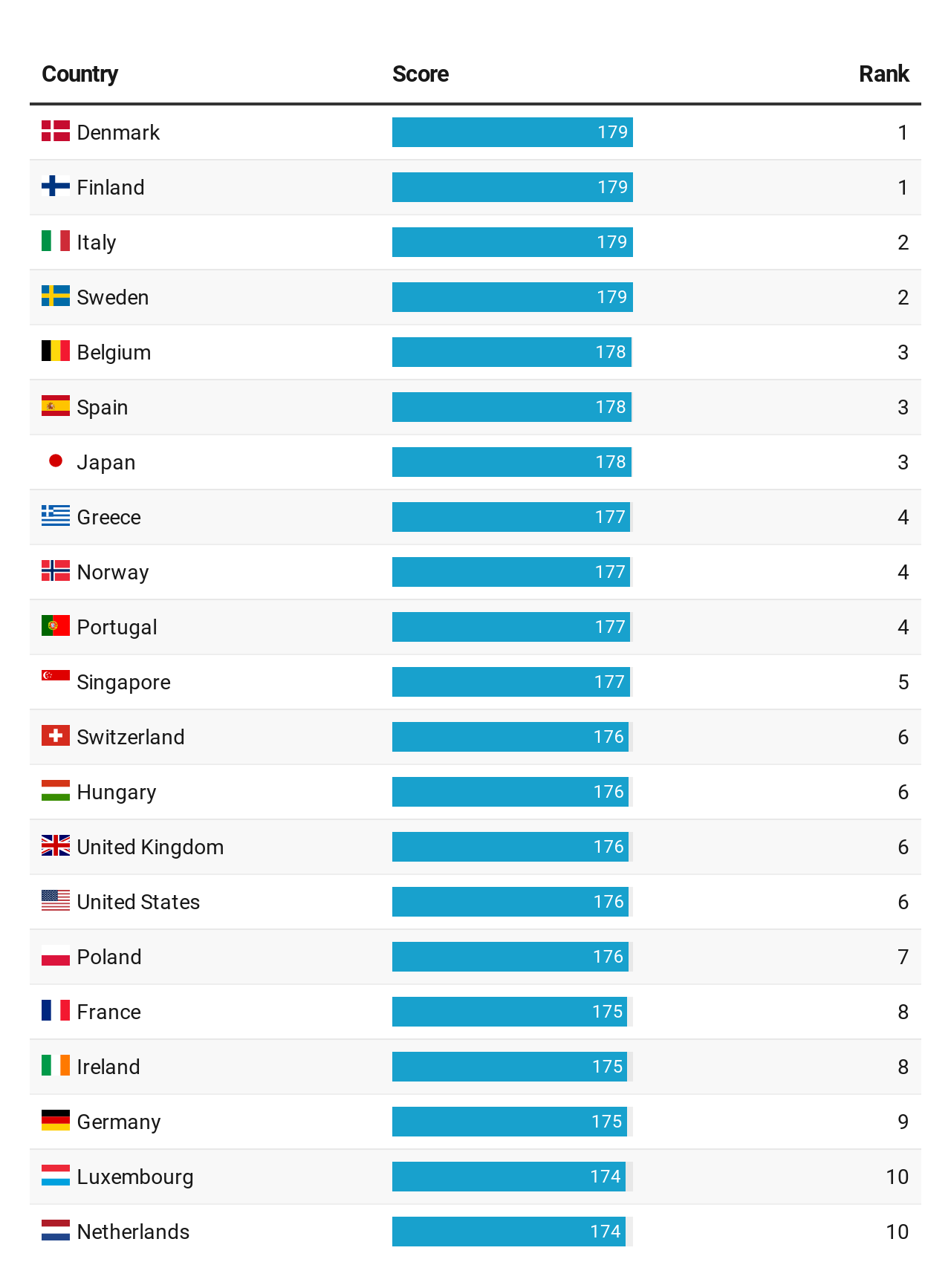 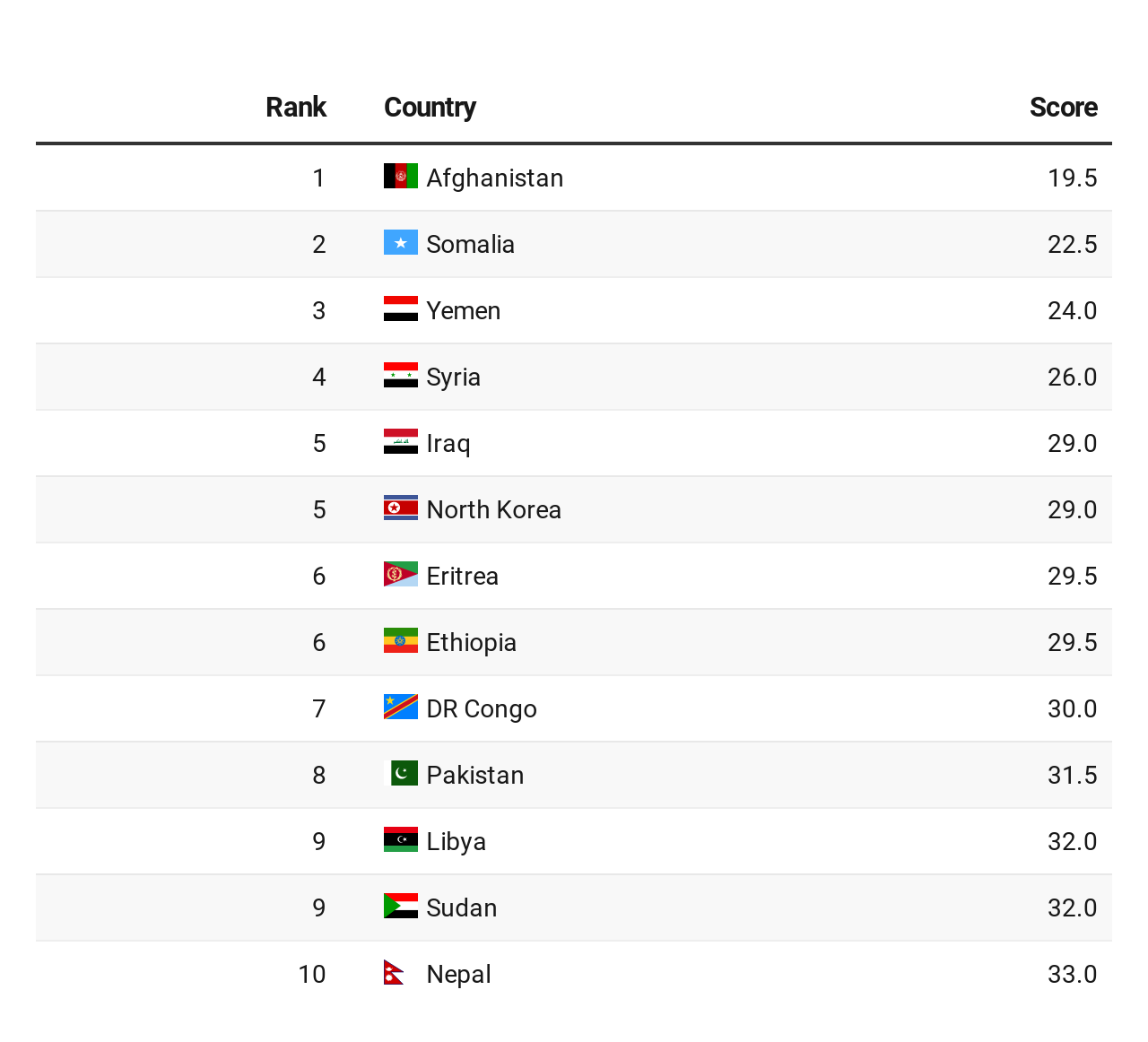 This model looks into 199 passports with visa access to 196 countries and territories to score the passport rank.

For example, when a country allows dual citizenship, the ability to combine/swapping passports for travel is very important. One passport has visa free access to Russia and other for China. Similarly citizens can seek nearest consulate help in case of emergency using either of passport. For example China, United States have highest number of diplomatic missions worldwide.

Vatican, Kosovo, Palestine  not part of UN are also included in the rankings as they issue separate passports.

Before we go any further, first we classify visas into three categories

Below we will briefly explain the features vectors we fed to the model. We first classified visas into 8 categories. Then we added passport features to the model.

We considered free movement for visiting these countries most important travel requirement for tourism, business and visiting family and friends including for studies.

We have assigned 5 points to passports issued by countries that are open to dual citizenship.

We have integrated countries that maintain diplomatic missions (embassy/consulates) into this model.

Countries that maintain more than 50 diplomatic missions abroad are given 5 points, thus gets boost in passport rankings

Consular protection refers to help provided by a country to its citizens who are living or traveling abroad and are in need of assistance, such as in cases of:

We assign full one point for this category

We assign reduced half point (0.5) to all these visa categories, as soft visas still require prior travel permission. 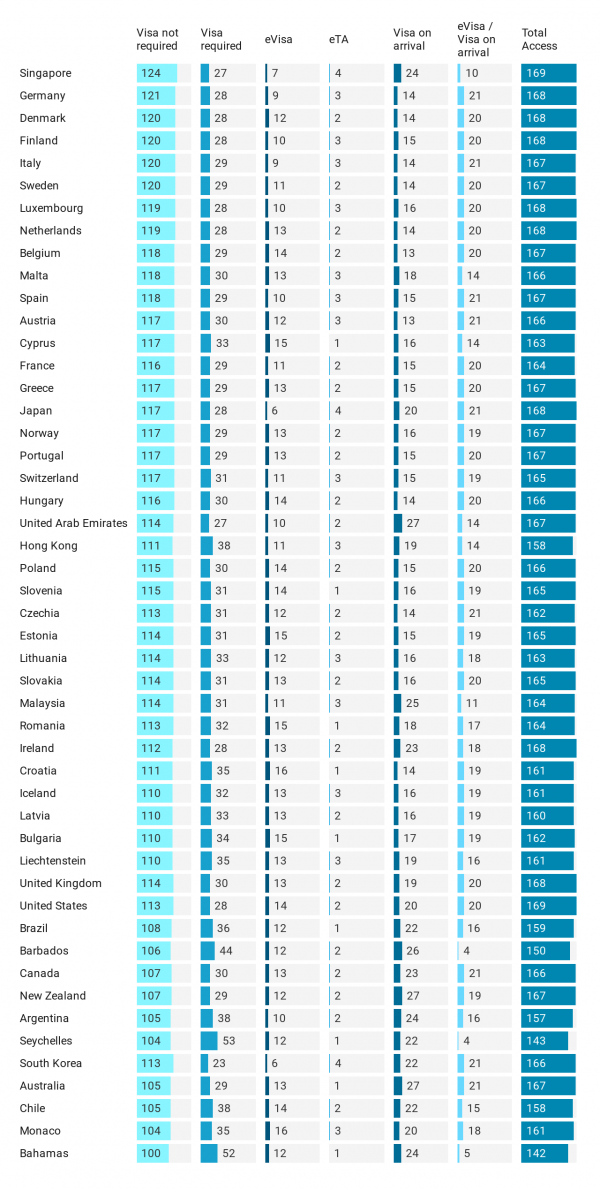 Other territories were not incorporated into the model.

We collected visa data from freely and publicly available information from Wiki database, Govt sites and other trusted sites. We extracted the data using Wiki API, filtered and processed this data using python and libraries such as pandas, numpy, beautiful soap finally classifying the data into 8 categories (see pdf)

We created a sparse matrix and crossing tabbing to collect the visa data as vectors. Finally we assigned points to features depending on its impact on passport ranking,

Passports from Citizenship by investment (CBI) countries have performed well in our rankings with european passports scoring top in the table.. We also did a comprehensive study on best CBI scheme in the world for 2020.

EU citizenship schemes take top spots, while Grenada is tied with Antigua for the fifth spot. Egypt has the worst CBI passport in the world as Egypt recently launched a brand new citizenship by investment scheme

These are the powerful CBI passports for 2020 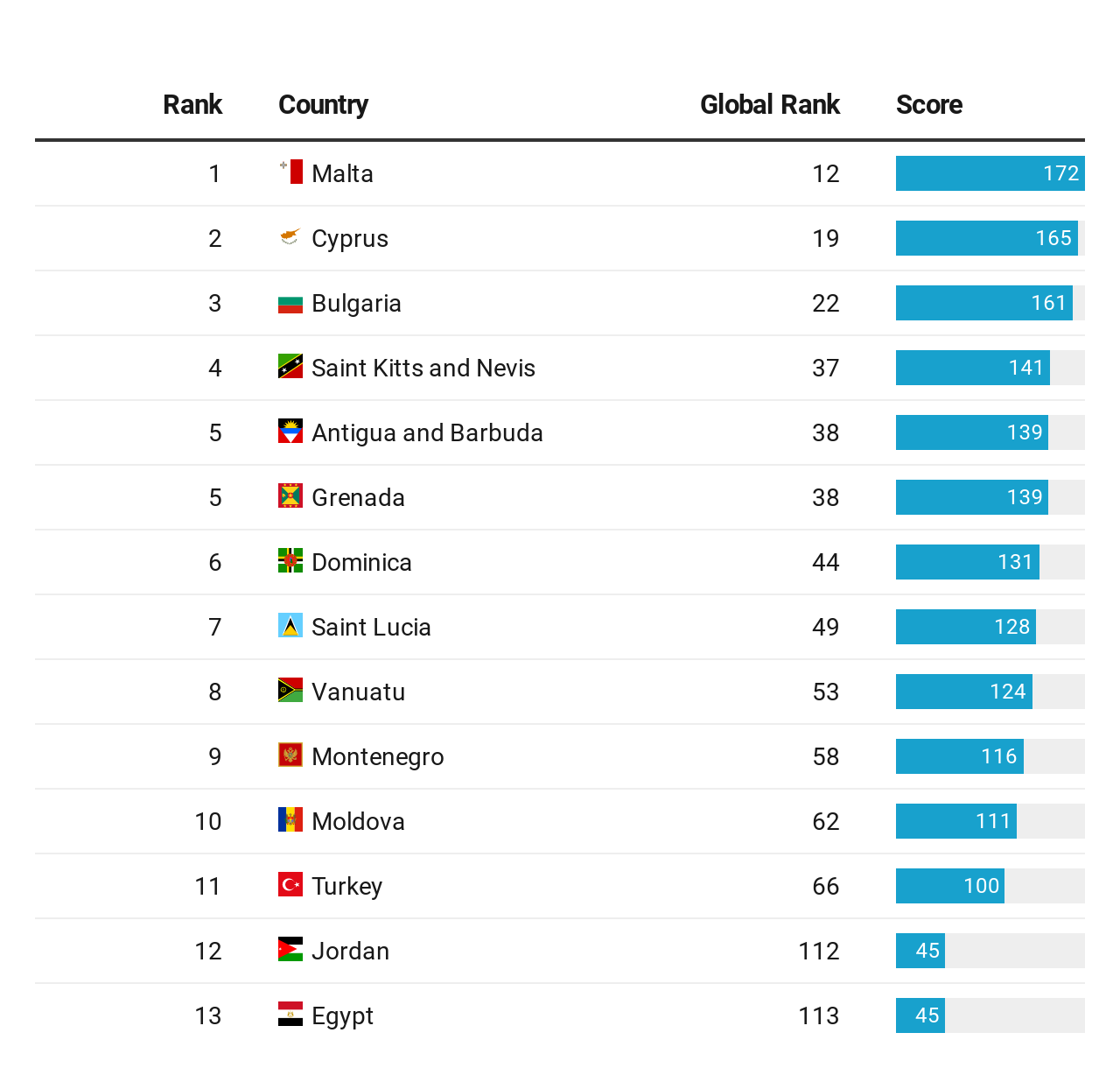 These are the best golden visa passports 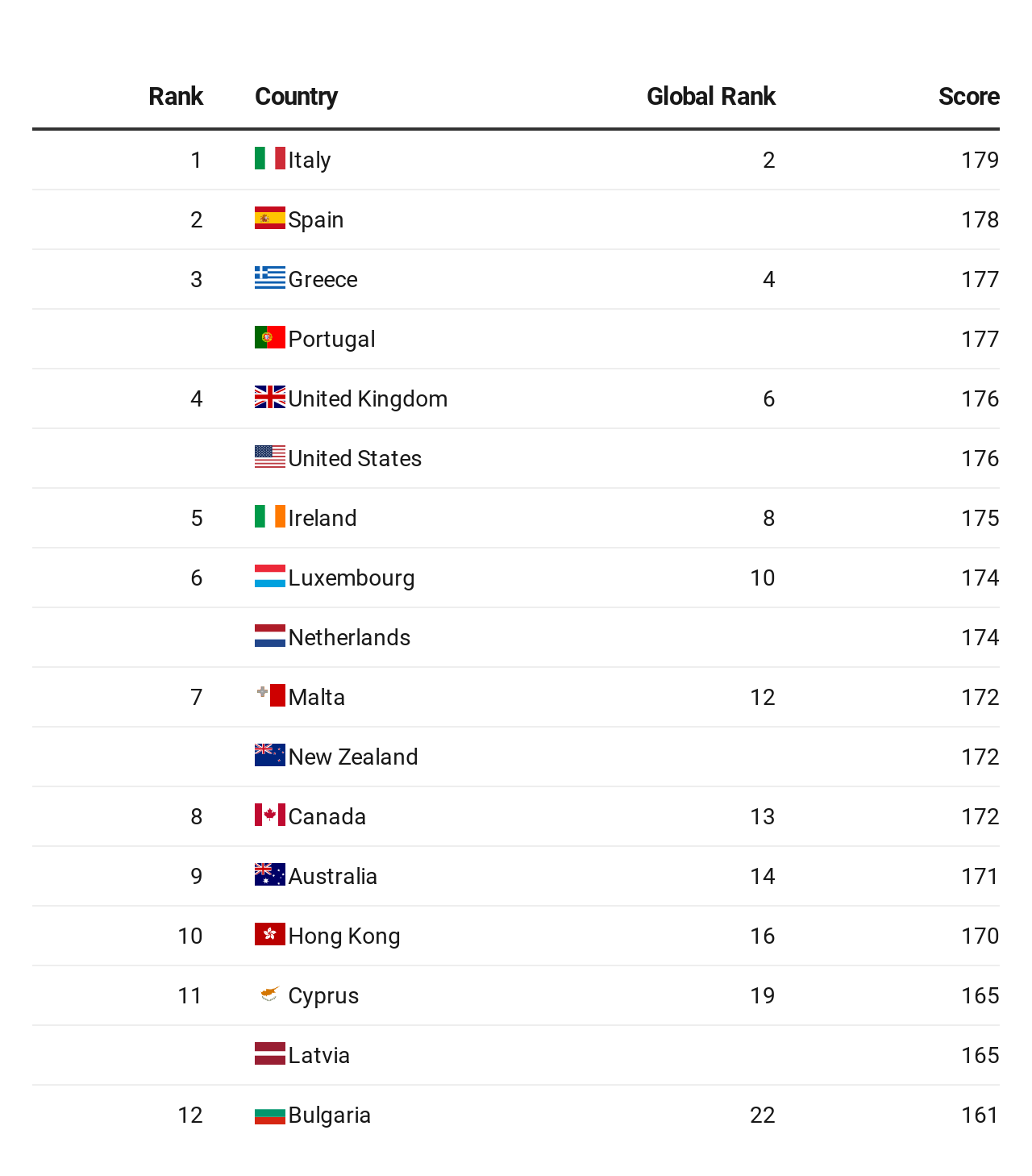 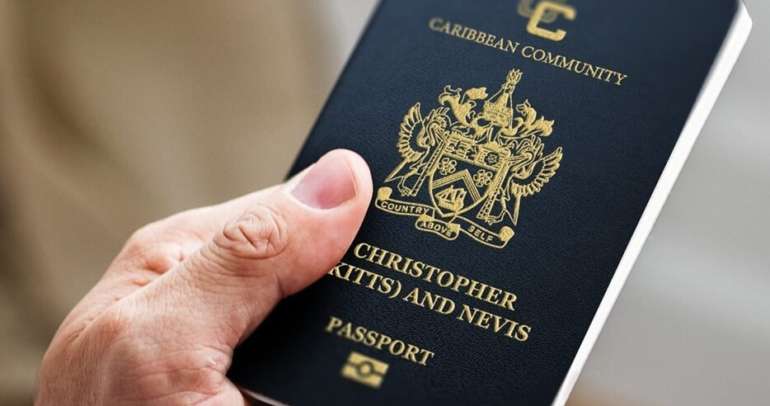 How St Kitts Passport became so powerful over the years 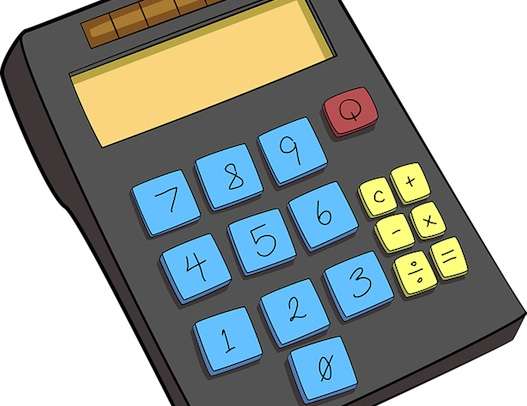